From CHG-Wiki
Jump to navigationJump to search

Thermal IR satellites image the earth constantly and the data are spatially and temporally aggregated, and released as "B1" worldwide IR temperature data at 0, 3, 6, 9, 12, 15, 18, and 21 UTC hours with 8km pixels. These satellites sense brightness temperature (Tb) from whatever surfaces are nearest to the satellite in the pixel. Land in Africa will measure on the order of 280-330 K. If there is a cloud over the pixel then the cloud top temperature will be reported, on the order of 220K. Mixtures of clouds and land will result in a mixed reported temperature. While cloudy days are generally cooler than sunny days, clouds can be ephemeral. If a high cloud happens to influence the temperature of a pixel on a warm day, the day was still warm, but the data at that hour will not reflect that. So we:

Then we aggregate daily Tmax to get monthly Tmax, and compare that with the average monthly Tmax from 1980-2015 to determine if, for example December 2015 was anomalously warmer than average. On to the details:

Prior to operationalizing the IRTmax process, we were working in the western US because the dataset is so rich. There we noticed some years where the geo-registration could be off by quite a bit. Most noticeably with B1 version 1 data, but B1 version 2 data still occasionally had some variability in pixel location on the order of a few pixels. This is an issue for land areas next to water bodies for instance, or in areas of high topographic relief. We decided to avoid years, 1980, 1981, 1983, 1989, 1990, 1991, 1992, 1993, 1994 and 1995 for calculating the climatologies.

The attached figure shows the various Geostationary sensors in use over the equator. The 1989-1995 time period for the western US coincides with the GOES-7 period when there was only a single GOES for the US, so it had to cover both coasts. 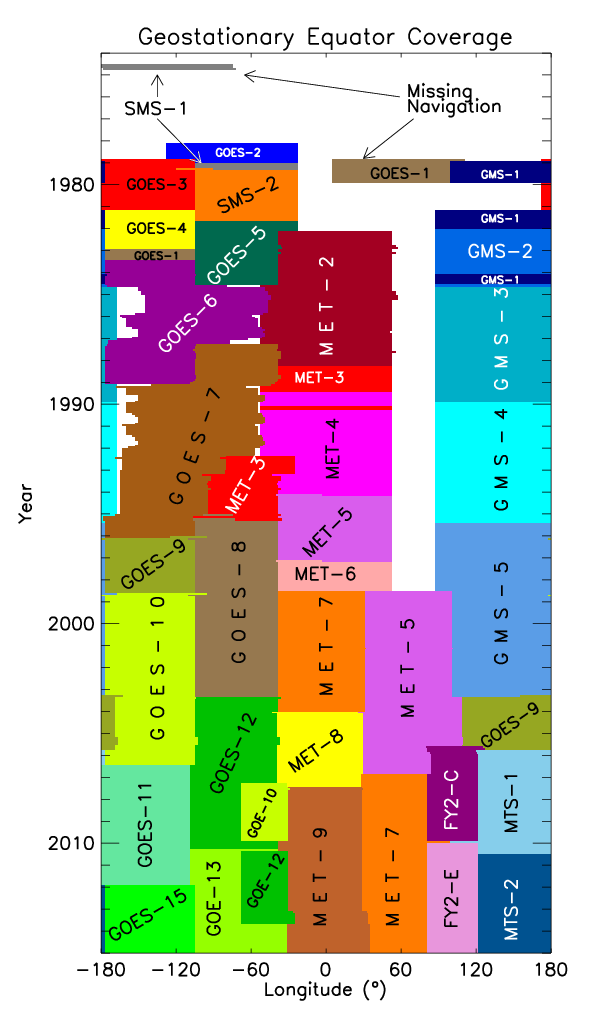 This should have no bearing on Africa which has consistent satellite coverage, just wanted you to know why we selected these 25 years to make a climatology.

Start by making climatologies of expected brightness temperature for each pixel for each month, 8 times a day.

at each pixel, get all of the data over a calendar month, Eight times a day, using a 5x5 array centered on the pixel over 25 good years.

The first cut is to exclude any data points colder than 180 K or warmer than 340 K, this is just bad data.

Look at the histogram of all data points (binned every 3 degrees to avoid spurious maxima) for each of the 8 hours/months. The goal is figure out a mathematical way to trim the high and low outliers so that we are identifying actual anomalies from actual data rather than identifying cloudiness or misregistration or sensor calibration errors, etc. A histogram of all of the temperatures for a given pixel for a given month for a given hour will have a really long tail on the low end, and then a near gaussian distribution of good temperatures at the high end. the low end is all of the solidly cloudy to partly cloudy data values. The first cut at this was to fit a gaussian to the entire distribution (which was dominated by the gaussian good values) and only keep values +/- 3 standard deviations from the mean. This worked fine for Africa, where generally the amount of good values is >> the amount of cloudy values. For the western US, especially in winter, the overall distributions become distinctly non-gaussian, because there are so many cloudy data points. The second cut at this seeks to isolate the good part of the distribution by uncovering the gaussian portion of the distribution through proxy. We find the upper threshold (a proxy for SD +3) and peak of the gaussian part (proxy for center/mean of the histogram) and then calculate the lower threshold (SD -3) assuming a symmetric distribution as (center - (thresh High - center)).

So we end up with a symmetric, gaussian-like distribution of good temperature values. getting the clouds out is incredibly important, obviously, and this works pretty well.

one of the first steps in the process involves generating a histogram, per-pixel, of all of the Tb values through time. then we identify erroneous high values that would lead to a higher than correct upper threshold. the first way we did this was to locate the end of the real histogram by finding 4 good values (bins with a count >10) in a row followed by two zeroes for the next bins. this breaks down in Siberia/Greenland/Antarctica and if the xxxxoo search string isn't found the histogram isn't modified, leaving some weird erroneous data points. I added 2 if statements to clarify things. if no xxxx00 then allow xxxxo. if not that, allow xxxxoo where x just has to be >0 rather than >10.

somehow record how many cloudy days (hours) were thrown out to get the temp value for a pixel for a month. use this to quantify uncertainty. i.e. december -- El Nino US west coast, India. might be an issue S Mex in summer, also S Mex jan-mar el nino years. Have a where statement where we apply threshH,L to the full mastrix. could add a count to that. might need to add a for loop for year. count would be #days x 5x5

climatespy.com is a really nice website with long term data for the US so you can easily get an idea if a month is anomalous or not. the stations per state are a little limited, though http://www.climatespy.com.fqdns.net/places/dir/united-states

USclimatedata.com is useful for smaller cities

things we are missing (december): we don't seem to be able to predict trends in India. also, el nino/la nina on the west coast and in the cascades/sierras seems to be an issue (i.e. rain 26 days in a month in places) = no cloud-free data.

could also download the data used to make the NCDC maps: http://www.esrl.noaa.gov/psd/data/gridded/data.gistemp.html

in terms of looking at the Alex maps I downloaded data from WorldClim (http://www.worldclim.org/current) they interpolate station data based on lat, lon, elevation. looks good. not a whole lot of stations in the sahara...

where code resides in Linux

There you have it.